Command Prompt vs PowerShell vs Bash – Which is Better 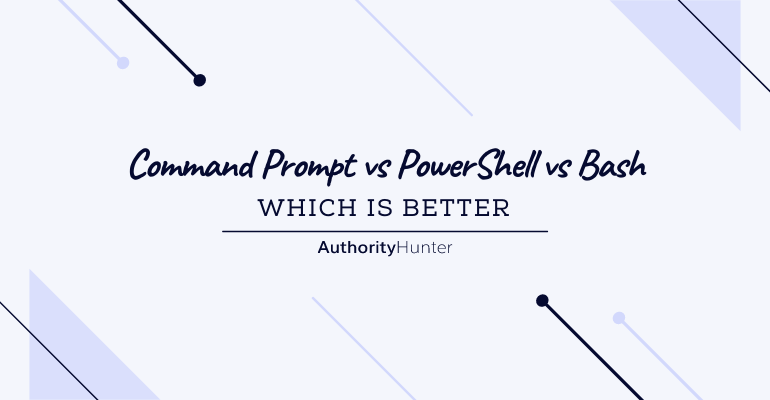 If you’re a techie or work in IT, you’ve probably heard about the differences between Command Prompt, PowerShell, Bash, and Windows versus Linux/Unix. Usually, there is a disagreement regarding which tool is best for handling certain administration and server automation duties. Furthermore, many individuals were still perplexed by the distinctions between PowerShell, Command Prompt, and Bash. Every day, many comparisons of their functioning and features are made, but it remains a hot issue. This post will introduce all three tools and create a clear distinction between how they vary. Following is a table comparing Command Prompt vs PowerShell vs Bash.

What Is a Command Promt?

Most Versions of windows have a command line interpreter tool called Command Prompt. It’s utilized to carry out directives that have been entered. The majority of those commands use scripts and batch files to automate activities, perform sophisticated administrative duties, and troubleshoot or resolve specific Windows issues.

Windows Command Processor is the official title for Command Prompt, although it’s often known as the command shell, cmd prompt, or simply by its filename, cmd.exe.

How to open the Command Prompt?

How to Use Command Prompt?

For using Command Prompt, type a valid Command Prompt query and any optional inputs. Command Prompt then runs the command as provided and executes the operation or task in Windows that it was meant to accomplish.

For instance, under your Downloads folder, running the following Command Prompt command would erase all PNGs from that folder:

Commands must be typed exactly into Command Prompt. The incorrect syntax or typo might lead the command to fail or, worse, this could run the incorrect command or the correct command incorrectly. It is suggested that you be familiar with command syntax.

The syntax is so crucial that inserting even a single space to some instructions, particularly the delete command, might result in the deletion of totally different data.

What Is a PowerShell?

Windows PowerShell is a Microsoft platform for job automation that includes a command-line shell and a scripting language. This sophisticated application largely supplanted Command Prompt as the default method to automate batch operations and develop customized system monitoring tools when it was launched in 2006. Many system administrators, particularly managed service providers (MSPs), rely on PowerShell’s 130+ command-line utilities to automate and scale activities on both local and remote systems.

PowerShell provides various commands known as cmdlets and functions that may be executed interactively or in a script. These commands are either built binaries or user-written custom code that encapsulates a specific operation, such as reading a file or pinging a distant machine.

How to Open the PowerShell?

From the Start Menu:

In response to the Command Prompt:

How to Use Windows PowerShell?

When the execution policy is set to Restricted, PowerShell scripts cannot be run at all. On all Windows client operating systems, this is the default configuration.

For instance, under your Downloads folder, running the following PowerShell command would erase all PNGs from that folder:

As long as PowerShell is launched as an administrator, that command will run interactively without a problem. However, when you save it as a script file and try to run it, it throws an error.

Each distinct function is referred to as a cmdlet in the PowerShell programming language. A cmdlet contains one or more defined sets of operations and can return a.NET object. Some of the most fundamental cmdlets included with PowerShell are those for browsing a folder hierarchy and moving or copying files.

What is Bash Scripting?

Nothing has to be changed. Simply type the instructions as you would usually, and they will behave properly. It’s only that now, instead of putting them at the command line, we’re typing them into a plain text file. In this sense, if you know how to accomplish things at the command line, you already know a lot about Bash scripting.

How to Open Bash?

How to Use Bash?

It enables us to have many versions of an application installed. We may choose which one to run based on where it is in our $PATH.

It makes things easier. As you can see above, the first directory in my home directory is a bin directory. This allows me to save my own scripts and applications, which I can then access from anywhere in the system by typing their name. If I needed somewhat different behavior, I could even develop a script with the same name as a program (to operate as a wrapper).

It improves security because, for example, a rogue user may write a script called ls that deletes everything in your home directory.

You don’t want to unintentionally run that script. But it won’t happen as long as it’s not in your $PATH.

If a program or script is not in one of the folders in your $PATH, you can launch it by instructing Bash where to search for it. You may achieve this by putting an absolute or relative path in front of the application or script name. You’ll recall that the dot (.) represents your current directory. Assuming this script is in my home directory, I could have also used an absolute path to run it.

For instance, under your Downloads folder, running the following Bash command would erase all PNGs from that folder:

In a nutshell, each tool seems to have its own set of perks and applications depending on the situation. If you are already aware of the language, some alternate users may prefer to utilize Command Prompt – its interface runs simple DOS commands, which may be sufficient for some people.

However, the numerous applications of PowerShell make it a more appealing tool for MSPs seeking complete network management.

PowerShell is a more advanced version of CMD that comes with a slew of new capabilities and functions. It also includes a more user-friendly graphical interface and enhanced server automation capability.

PowerShell and Bash are similar to apples and oranges in that they are used for various operating systems and have distinct functionality.

How to Check Database Response Time in Oracle 11g?